We embarked upon a trip to Lijiang which would involve spending the night on the overnight train.  From Kunming it’s a journey of around 8 – 10 hours, 517km. You can find more information here:  https://www.chinaticketonline.com/lijiang-train/

The sleeping compartments in the ‘hard sleeper’ class are open and you can’t book a whole compartment so you have to deal with being in very close proximity to strangers! There were 6 in our group and so we were lucky to take up a whole compartment, although we did have to swap with some other passengers so that we were all together. This is a really cheap way to travel and the experience will stay with us forever! The scenery along the way is breathtaking, although admittedly you don’t see much until the morning.

The very best part of the journey was the wake up call.  We were gently awoken to music (which features flutes and frogs…) and then the lights came on. We recorded the music on our phones and just hearing it now takes us all straight back to that journey!

“Lijiang, an attractive tourist destination in Yunnan Province, is considered a fairyland blessed with fresh air, clear streams, breathtaking snowy mountains and an undisturbed landscape inhabited by friendly people. It exercises jurisdiction over four counties and an Old Town District. This is the main region inhabited by the Naxi People, one of China’s 55 minority ethnic groups.”

We found the tiny Yican Guesthouse to spend the night and spent some time soaking up this beautiful little town wandering around the cobbled winding lanes and looking around the local Naxi craft shops.

From Lijiang we travelled by taxi to Tiger Leaping Gorge. The gorge is one of the deepest river canyons in the world at an approximate depth from the river to the mountain peak of 3790 metres. The Jinsha River flows through the gorge which is a primary tributary of the Yangtze River. It is located around 60 km north of Lijiang.

According to legend, in order to escape a hunter, a tiger jumped across the river at its narrowest point…and this is where the gorge gets its’ name.

There is a 50 yuan fee to enter the gorge however when our taxi pulled up at the entrance, the man in the booth did not want us to enter, saying that there were road works and he would not take our money. We were adamant that after our long journey here from Kunming we would not be deterred and so our driver dropped us off and we continued on foot. The attendant just shrugged and said “you can come in but it’s at your own risk”. Well, my sister and her husband had visited before and could think of no reason we should be at risk from ‘road works’, especially as we were going to trek on the higher trail, and we were rather pleased to get free entry!

So we began our trek and we found some guides with ponies to take us up the mountain to the Tea Horse Guesthouse.  It was dark upon our arrival and the sight that met us in the morning was breathtaking.  We were high up in the mountains, above the clouds! The owners were very hospitable and the food was amazing. We had an evening meal and breakfast and when we left in the morning the owner had made us all apple cakes to take with us for the trek back down the mountain. 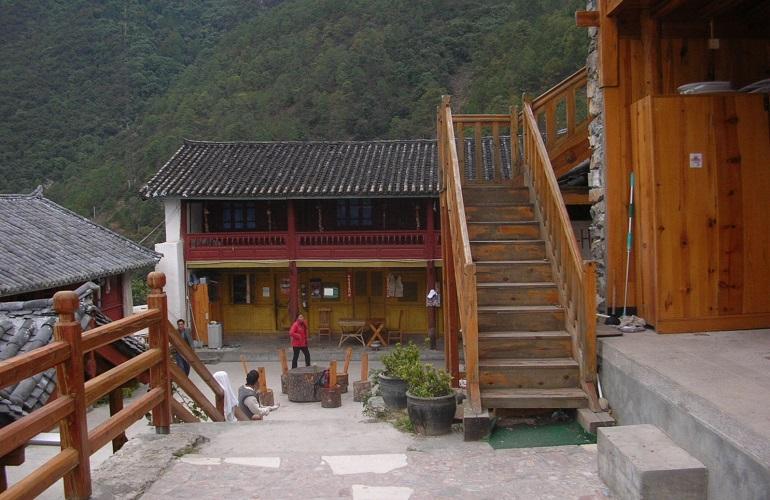 In the morning we began our descent down the mountain, taking a steeper, more direct route than the previous night and soon found ourselves back on the lower road but further along from the entrance. In the distance we could hear rumbling which we thought was a far off thunderstorm echoing through the gorge. We had about 3 miles to walk back to our pre-arranged taxi pick up point and we set off. The rumblings were getting louder and about a hundred yards in front of us huge boulders came crashing down the mountainside, bouncing off the road and through the concrete barriers! We waited for the rock slide to stop and then RAN! I was terrified and felt dreadfully irresponsible for putting my children in danger. About half a mile further along the road we discovered why the man at the entrance had been trying to dissuade us from coming in. The ‘road works’ were a little more than we had imagined, something had got lost in translation….they were blasting the sides of the mountain (parts which overhung the road) with sticks of dynamite! And this was causing the rock slides all along the gorge. I’m not sure who was more shocked, the workmen to see us there with our kids, or us to see the boxes of dynamite. It was one of the most surreal moments of my life! Needless to say we continued to run….