Croatia had long been on our destination wish list and when I found flights with Ryanair from Bristol (our nearest airport) to Zadar for £40 each, we decided it was time to go.

Here is our itinerary:

Tuesday – Flew to Zadar at 7.25pm, flight took 2.25hrs, arrived just before 11pm local time. We took a taxi to Apartment Mare in Badinbub (100HKR/ £12) which I’d found on http://www.booking.com. Quite a basic apartment but only a 5 min drive from airport and it had everything we needed and at £37/night it was very cheap too.

Wednesday – We got a taxi back to the airport (€20) and collected our rental car (Oryx Rental -white VW Golf £63/7 days). Our taxi driver was lovely and waited while we did all the paperwork then helped us transfer luggage over to our rental car!

We drove to a nearby Lidl supermarket and bought some breakfast and other food.

We then headed up north to Plitvice National Park. It took just under 2 hours on brilliantly sweeping roads with very few cars and amazing views. It was a toll road and the whole journey cost 24HKR or around £3. We went through a 6km tunnel through a mountain which was an experience.

We arrived at the park and bought a 2 day ticket (£43 for 2 adults, no charge for 6 yr old Lucie) at Entrance 2 and went off to explore. The weather was beautiful and sunny and the colours of the trees were stunning 🍁🍂

We took the short boat trip over to the other side of the lake and then walked (trail E) for 5km to a bus stop which took us back to the entrance. We were exhausted but so glad we’d done it as the sights were beautiful!!

There were so many tourists with their selfie sticks taking 1000’s of selfies, it was quite annoying 🙄 But we were very good and didn’t push any of them into the lakes…

There were wooden boardwalks that allowed you to walk all the way around the lakes and right up close to and even over the waterfalls.

We then drove to our apartment for the next 2 nights – Plitvice Diamond Apartment in Korenica (£125/2 nights). A really nice clean apartment with balconies, very modern! Our host Ivana was lovely and so hospitable, she later brought us up some homemade ‘brandy’ and a plate of shortbread. We went out to dinner at Villa Villebita which was a nice restaurant we’d driven past earlier and Ivana recommended it.

Thursday – We drove back to Plitvice National Park to Entrance 1 where the Big Waterfall is and we walked all the way down to it. More selfie-stick tourists! A really beautiful waterfall and well worth the walk. The autumn colours were so vibrant and breathtaking, the photographs just can’t capture the beauty.

We had a picnic lunch then drove on to Rastoke, a village a few miles north of Plitvice which is built around loads of waterfalls and is very pretty. There is a small visitor centre and a few cafes and restaurants as well as guesthouses and rental properties.

Had a cup of tea in a little cafe bar on a balcony that hung out over the river!

Friday – We left Korenica by about 10.30am and drove back down to Zadar and then east along the coast road (highway 8) stopping at Pakostane to have some lunch at a restaurant on the marina (cheese omelettes) and take a look at the beach.

It was really pretty with pine trees going down to white gravelly beach and it was almost deserted! Bit rough on the feet though.  Lucie went straight in the sea as she already had her costume on underneath her clothes! Ben had a nap on the beach while I looked online for our next apartment. We also stopped at a few more coastal villages trying to find a nice sandy beach and a place we wanted to stay but everywhere was deserted as the high season was over. We checked out a resort called Crvena Luka but even though it was very luxurious with a spa and private beach etc it really wasn’t what we were looking for. We decided to head back to Zadar area and ended up in Vir which is a tiny island connected to mainland by a bridge just a few miles West of Zadar. We booked an apartment online and then went for dinner at a little place called TikTak. When we turned up at the apartment though and called the owners, they hadn’t seen the booking  email and were away! So we had to find somewhere else, which caused us some stress as it was already 7.30pm! But we found a place in nearby Privlaka called Apartment Lolo (£35) so we were very relieved. It was a lovely little apartment with everything we needed.

Saturday – When we left Privlaka the owners’ mother-in-law (who spoke no English) gave us a huge bag of dried figs from their own trees which were delicious!  We drove to the old town of Nin and had a look around. Saw a 9th century church where Lucie tested out the acoustics, and a statue of Gregory Nin (very famous and legend has it that if you rubbed his big toe it would bring you good luck, needless to say his big toe was very shiny!)

Had a coffee while Ben and Lucie practiced their origami and I booked our next apartment in old town Zadar (£140/3 nights).

We had a walk around the waterfront and met a couple from the U.K. who now live in Orlando selling vacation property, we chatted to them for a bit about the recent  hurricanes etc. We spotted lots of crabs in the water and also a dead snake on the road!

The bridge was damaged from a huge storm they had a month ago and had a temporary fix so it could still be used.

We had lunch at a lovely restaurant in one of the ancient town squares and then spent some time at Queens Beach, a pretty sandy beach on Nin’s Lagoon with tiny purple crocuses and pine trees around it.

We then drove to our apartment in Zadar which was right on the sea front in a 4 storey old building. Rather a shabby front door but the apartment was stunning. Parquet flooring, modern kitchen and bathroom, two double bedrooms and a lounge with balconies overlooking the sea and the town. We went for a walk to buy some supplies, then chilled out and had a glass of wine. Then we went for a wander along the sea front to see the famous Sea Organ (or rather to hear it!) and also the Greeting to the Sun solar lights display. Lucie loved it and had a good run around and played at a great little park we found.

Sunday – Had a wonderful sleep and didn’t get up until past 9 and then had breakfast on the balcony.  Zadar old town has lots of Gothic  and Romanesque architecture and fascinating ruins to explore. We walked around for a couple of hours with our tourist map and ticked off all the historical buildings and archaeological remains etc. The Archaeological Museum of Zadar has several departments such as: pre-historic, ancient, medieval and submarine archaeological units, as well as the joint archaeological collection in Nin, the library, technical unit and the department of general affairs.  For more information see the website: www.amzd.hr

We stopped for lunch at a little restaurant just off the People’s Square (a pretty and vibrant little square with a clock tower as the focal point) called ‘4 Cantura’ and spent some time chilling, drinking wine and waiting for the rain to stop. This was a stunning place with an amazing atmosphere and the staff were lovely. The kitchen area is open so you can watch them cooking. This was the best meal of our trip!

We got an ice cream from one of the amazing ice cream parlours on the way back to our apartment…. there was a huge assortment of flavours, Lucie had Kinder Egg, I had Tiramisu and Ben had something we couldn’t pronounce 😂

There was an epic thunderstorm in the evening which we watched from our balcony. It went on for hours and got closer and louder!

Monday – Went for a walk along the sea front this morning because the sea was very rough and we wanted to hear the Sea Organ again and it was much louder. Lucie said it sounded like bad dream music and it did!

The weather was bad, a bit windy and rainy so we went to the Museum of Illusion (150HKR/ £18 family ticket). http://zadar.muzejiluzija.com/en/about/

It was good fun but could’ve been bigger. There were lots of wooden brain teaser puzzles that you could have a go at. Ben managed to solve a few but some were impossible!! There was an ‘Ames Room’ where the floor and walls sloped giving an optical illusion that in one corner you were a giant and in the other corner you had shrunk. Lots of optical illusion art on the walls, holograms and magic eye pictures. There was also a vortex tunnel that made you feel like you were spinning even though you weren’t! It was good to find something indoors though. We then walked back to our apartment and had a nice chilled afternoon 😊

Tuesday – We checked out of our apartment and took a drive along the coast to Bibinje and took a walk along the seafront. Then we went back to Zadar (as we couldn’t find a restaurant we fancied!) and we had lunch just off The Forum Square at an Italian restaurant.

After lunch we climbed the bell tower of The Cathedral of St. Anastasia which is the Roman Catholic cathedral of Zadar.  It’s origins date back to the 4th and 5th centuries while much of the current building was constructed during the 12th and 13th centuries in the Romanesque style.  We climbed the 180 steps which provided an amazing aerial view of the town! The entrance was only about 2€ each and no charge for children. 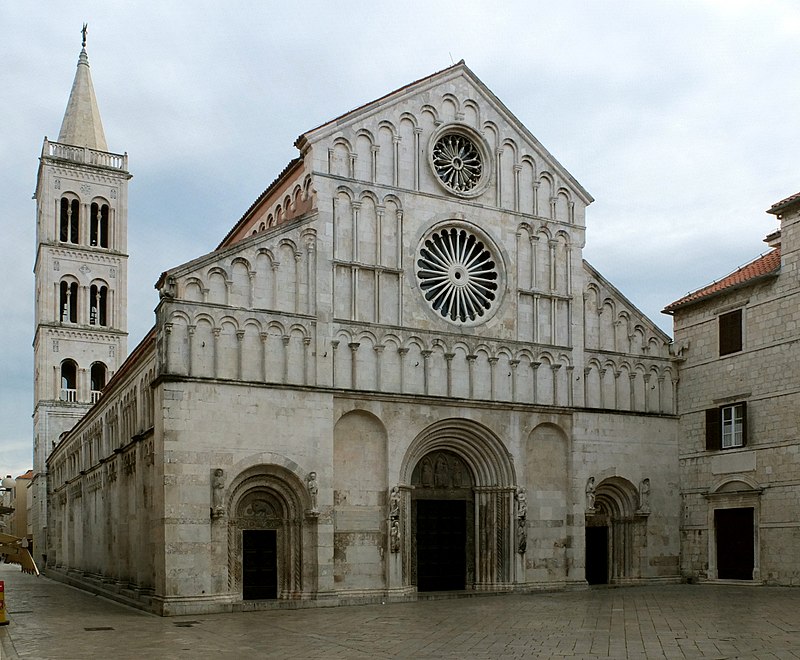 We then got an ice cream at an ice cream parlour right next to the cathedral and made the most of sitting in the sun for a while before we headed back to the airport.

This was the end of our week in Croatia and we had fallen in love with it. We will definitely be coming back but will probably visit the other end of the coast and check out Dubrovnik and Split next time. I highly recommend Zadar as a family friendly destination, the people were friendly and we felt safe walking around late at night.